What to do when you only have one day in the city that never sleeps?

Last year I was fortunate to be connected with the International Chamber of Commerce when they were holding their annual Dubai edition of their global conferences. The personnel in charge of organizing the events was a great team to work with and after the three days of covering the sessions I was told I was welcome to continue working them at the other stops on their international calendar. Perfect! Who doesn’t want to travel for work? The next stop would be Singapore - a first for me – in June, followed by New York in September and next up will be Miami in November.

To be clear, given I’m based out of Dubai, the ICC doesn’t fly me everywhere business class and put me up in the same 5-star hotels with the team! I have to cover my own expenses; but because the photography budget is good enough that I can do this while still making some money from the job itself, I tell persuade myself that it’s justifiable…So that means I arrange my own flights and find a cool Airbnb enabling me to enjoy exploring the locality.

Admittedly, justifying the recent New York trip was a little more of a stretch because it was only a two-day conference - therefore a smaller budget for me. But the devil on my shoulder won the battle by reminding myself of how cool a city NY is (I ticked off a major bucket list item a couple of years ago, visiting for Christmas and taking in my first NBA game.) Plus, I could tie in a trip home to see my family on the way, coinciding with my birthday, which I never get to spend with them ever since moving to the Middle East. Furthermore, it just so happened that they had already booked what I regard as favourite place in the world for a few days – my Uncle and Aunt’s cottage in Dale, a tiny village on a peninsula in Pembrokeshire, surrounded by beaches and countryside. 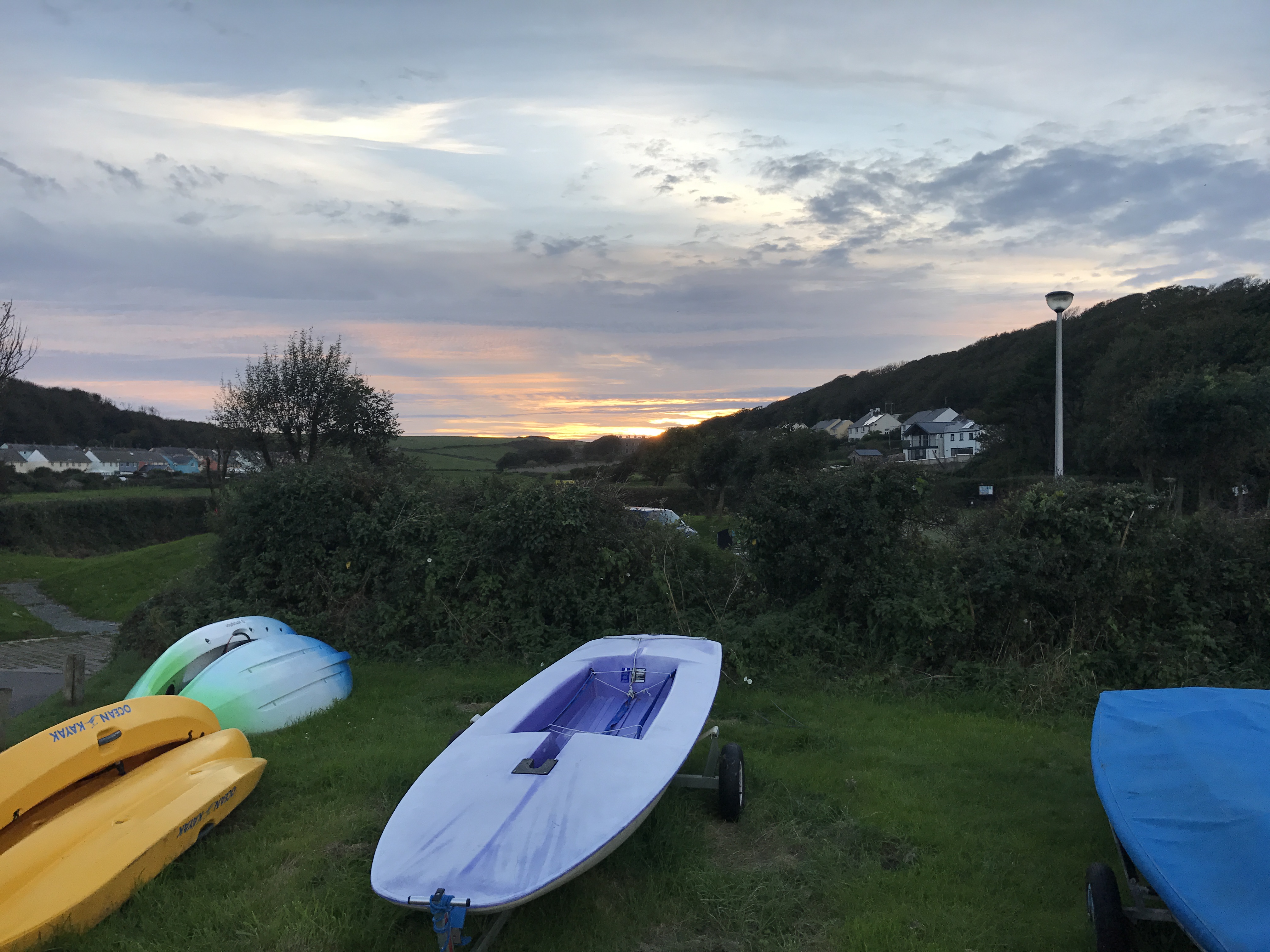 So after a great weekend spent drinking Welsh real ales, eating Welsh seafood and Welsh ice-cream, walking Welsh Collies on Welsh Beaches and jumping in and out of pools along the rugged Welsh coast surrounded by sea lions, it was time to head back to Heathrow and onto the Big Apple. 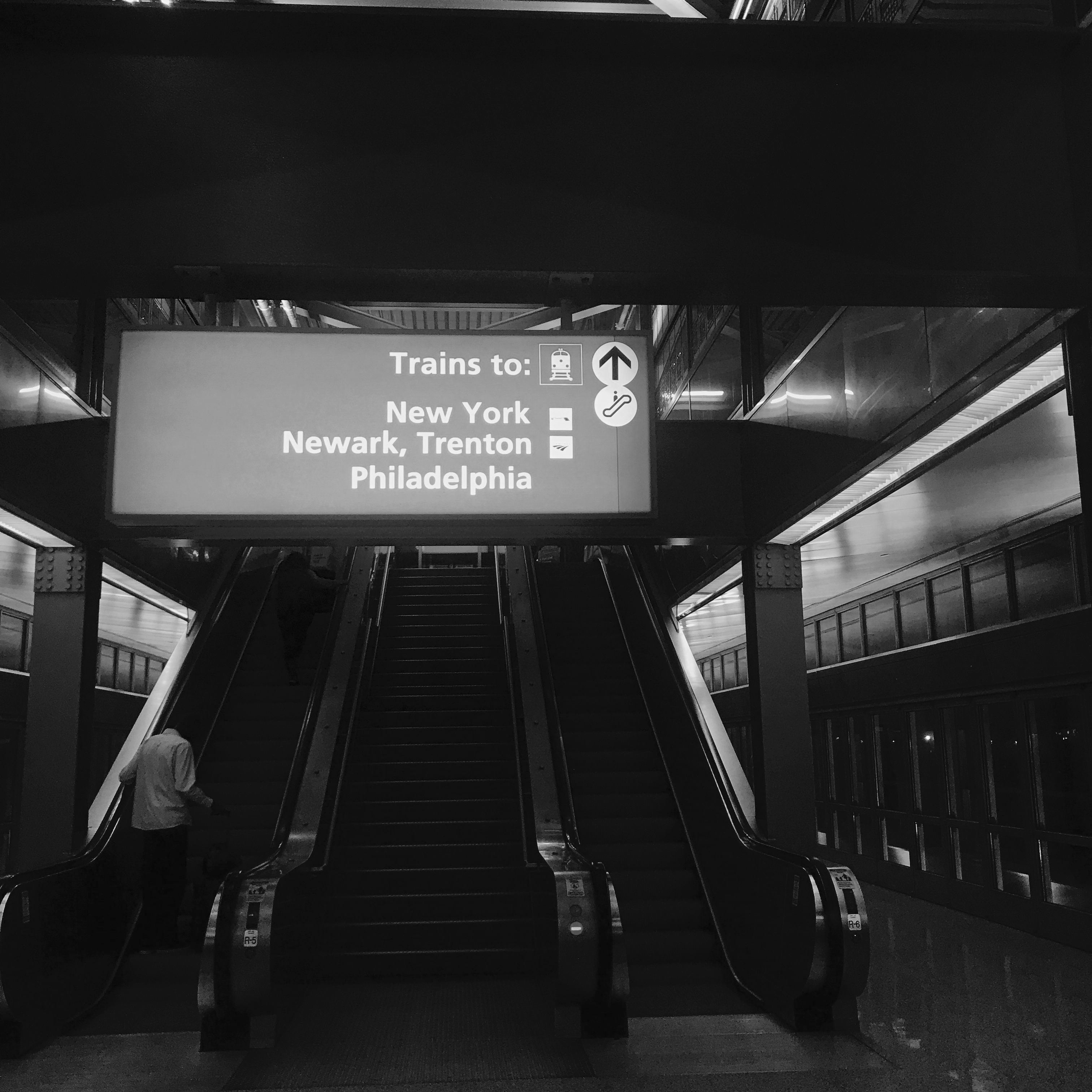 I had prepared myself for what I knew would be an exhausting trip, and that by the time I would return to the UAE the affects of running on adrenaline would catch up with me. Not just because of the weekend stop in Wales, but because I would be arriving at my NYC Airbnb eventually late in the evening before having to wake up early the next morning to get to the first day of the conference. And I would absolutely be making the most of my time when not working: exploring East Village, Soho, Little Italy, Greenwich Village and Washington Square Park on the nights after the conference. But I had one full, free day before my departure and wanted to make the most of one of the world’s greatest metropolises.

This day ultimately started the night before, with a walk through Washington Square Park and onto Greenwich Village to find a cool jazz bar. But this park at night was an unexpected experience in itself: at 11pm a brave, young dude with a guitar was in the middle of singing out some awesome tunes to a chilled out crowd that featured a half naked yogi doing his stretches, as well as a homeless guy with a mouth organ who brilliantly riffed along with some of the numbers. The park’s key landmarks - the arch monument and fountain - were also surrounded by midnight characters – artists or all sorts, some covered in body paint putting on some kind of show.

But smooth whiskey sours and smoother sounds was what I was seeking so onwards I went, out of the park to check out some of the potential venues recommended to me by my Airbnb host.

The Village Vanguard was closed and Smalls Jazz Club was jam packed, but across the street at Mezzrow, a cozy underground piano bar, a few seats were available and the duo were in full swing. As expected, they were incredible, chatting to the crowd in between the lively numbers, making up the set as they went along. When they finally finished around 2am I was tempted to go back to Smalls where another band would be starting, but thinking about what I wanted to accomplish with my day a few hours later, I decided to go back, grabbing a slice of pizza before getting a few hours sleep. 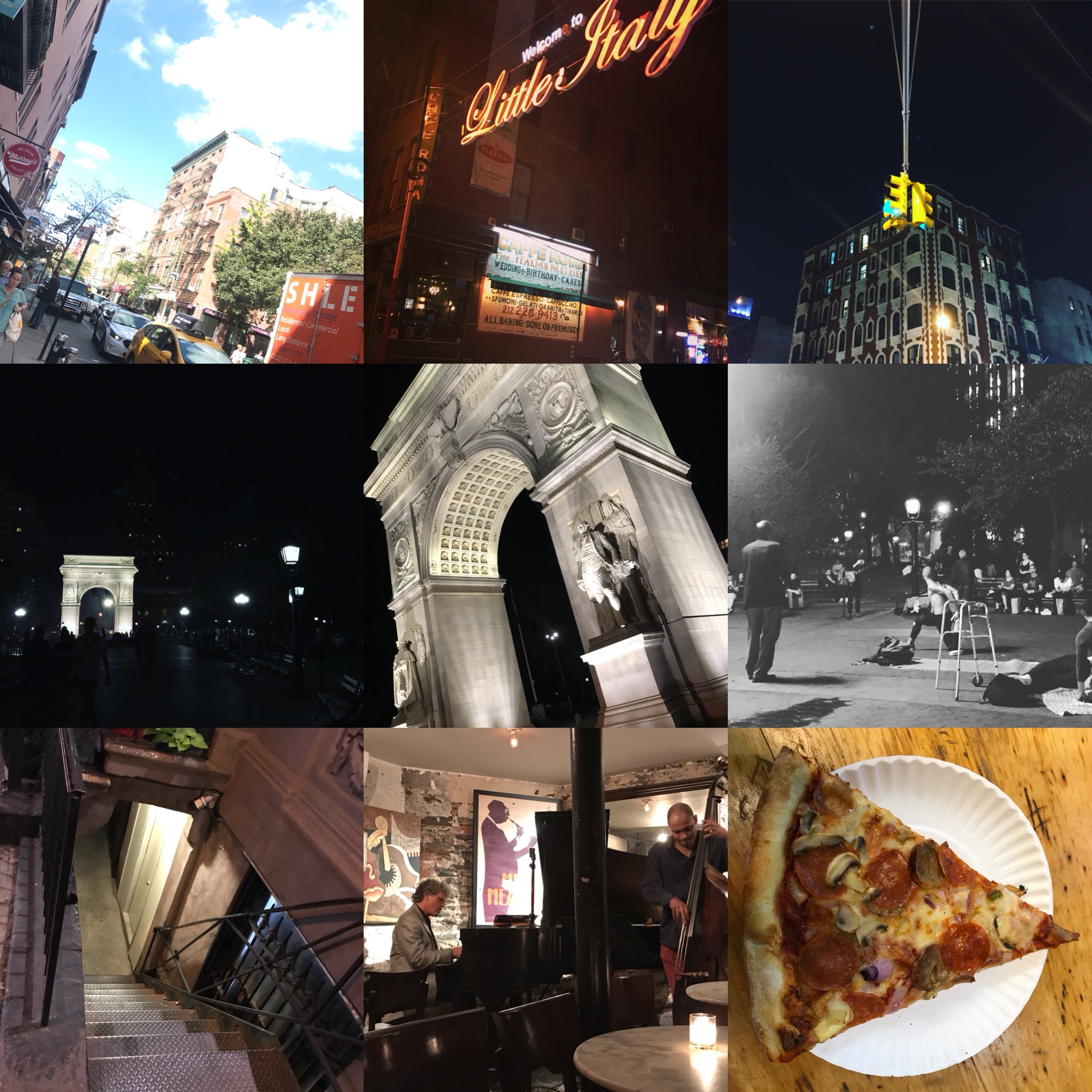 Wake up to a free day!

And I slept… when I woke suddenly about 10am I was annoyed I had missed half the morning. So I jumped in the shower (located in the kitchen – typical NYC quirky-living) dressed and went around the corner to a funky barbershop I’d been eyeing up on my morning commutes to the conference, and went in to clean up my week-old beard. Then, grabbing a fresh breakfast bagel, juice and coffee from the shop a few doors down, I proceeded with my day.

Having been to New York before, I wasn’t so concerned about seeing Times Square, 5th Avenue or Central Park again when I only had the one day free. I planned to start my journey by walking through Chinatown, past the Supreme Courthouse and NYC Police HQ and across the Brooklyn Bridge; with the weather being beautifully sunny and breezy, the views looking back at the Manhattan Skyline and over towards The Statue of Liberty could not have been better. It had been suggested that I explore the Dumbo and the parks on the Brooklyn waterfront, but I decided against it on this occasion and returned back over the bridge, cutting through City Hall Park and taking in a tense chess game before going to see the Fearless Girl, a statue originally erected as a temporary landmark, symbolizing defiance and female equality in the face of the charging bull that defends Wall Street; but the piece has since been kept standing indefinitely. Next I crossed over to the awe-inspiring World Trade Center memorial. This was one place I did see on my previous trip but allowing yourself to take in the significance of what happened here, imagining the chaos, makes your hairs stand on end and I wanted to be there again. Every visitor should check out this area. 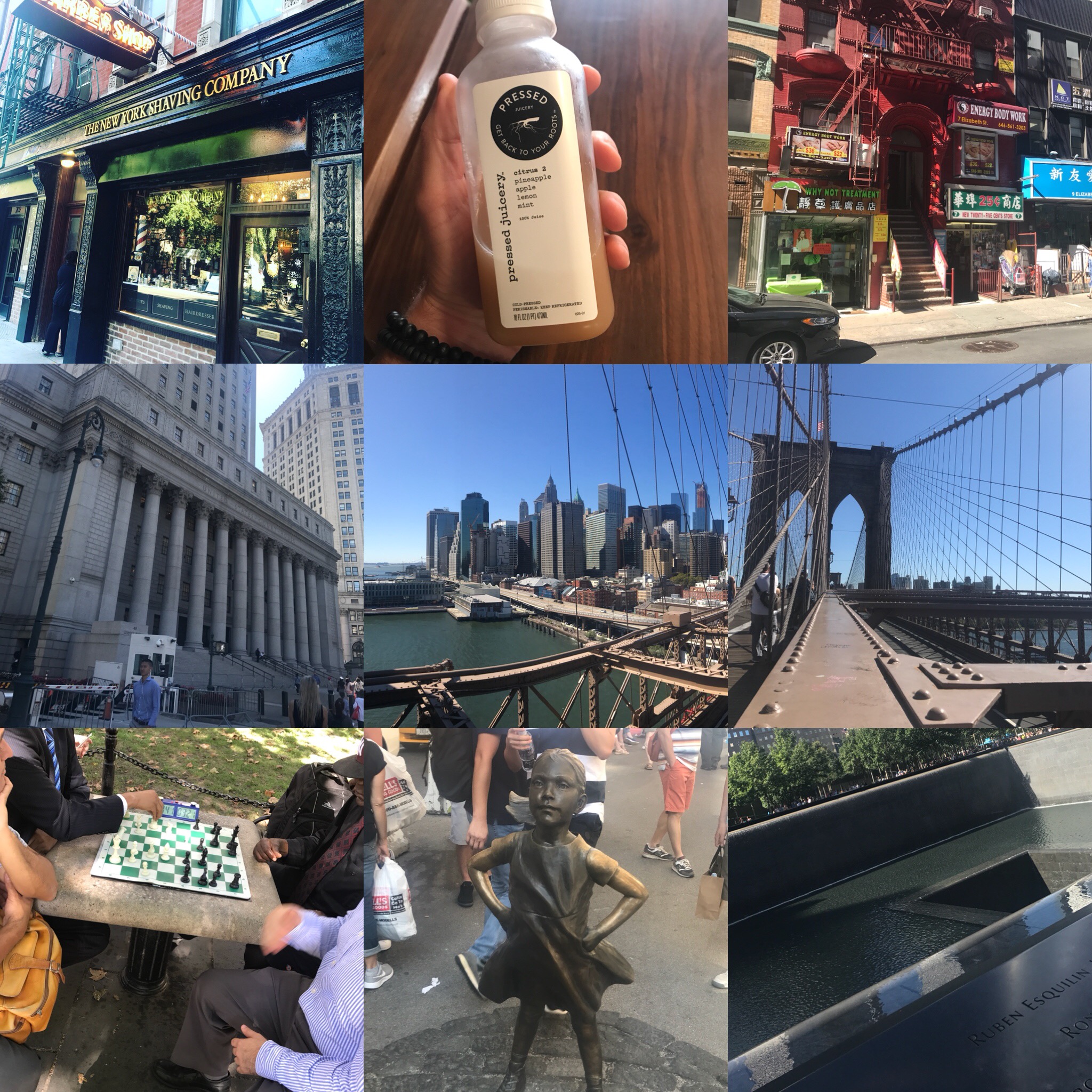 My next destination would be The High Line, but via Tribeca and watching some pick-up basketball games, before taking a long walk alongside the Hudson River. Again, the weather provided incredible views, this time of New Jersey. People were sunbathing on the grass near the water and rad kids practiced their skillz in the skateboard park. After a good 30-40 minutes walk I turned inwards where the Meatpacking District meets Chelsea, climbing the stairs to check out the High Line, a formerly abandoned railway section that has been regenerated as an eco-system and is considered an icon of landscape architecture. It’s a peaceful place to sit, have a drink or ice cream while taking in multiple views of Manhattan directions. Once I had explored the elevation though, I decided instead to look around the local area below and enjoy some fresh juice while taking a rest.

By now it was late afternoon and I was getting hungry. Walking through Chelsea I noticed a small crowd and very smart car waiting down an expensive looking side street; apparently they were waiting for Sarah Jessica Parker to come out. I was tempted to wait around to see if she wanted to hang out but, as mentioned, I was hungry! So I continued on and chose a cool, cozy Tapas bar with nice views on to the street, delicious food and cold Spanish beer. My legs and stomach were happy…

I took this time to check my map to work out exactly where I was; as a lifelong basketball lover I had considered the idea of going to check out the Rucker, arguably the world’s most famous street basketball court, where legends come to play, whether they are famous NBA stars or urban baller celebrities. But by the time I had sampled enough items on the menu time was getting on and the Rucker is located uptown in Harlem… quite a trip in a taxi or on the metro considering the evening was fast approaching.

So I decided to continue across town and back to my Airbnb to pack, maybe explore the local vicinity one more time, before getting a couple of hours sleep and an Uber to JFK. 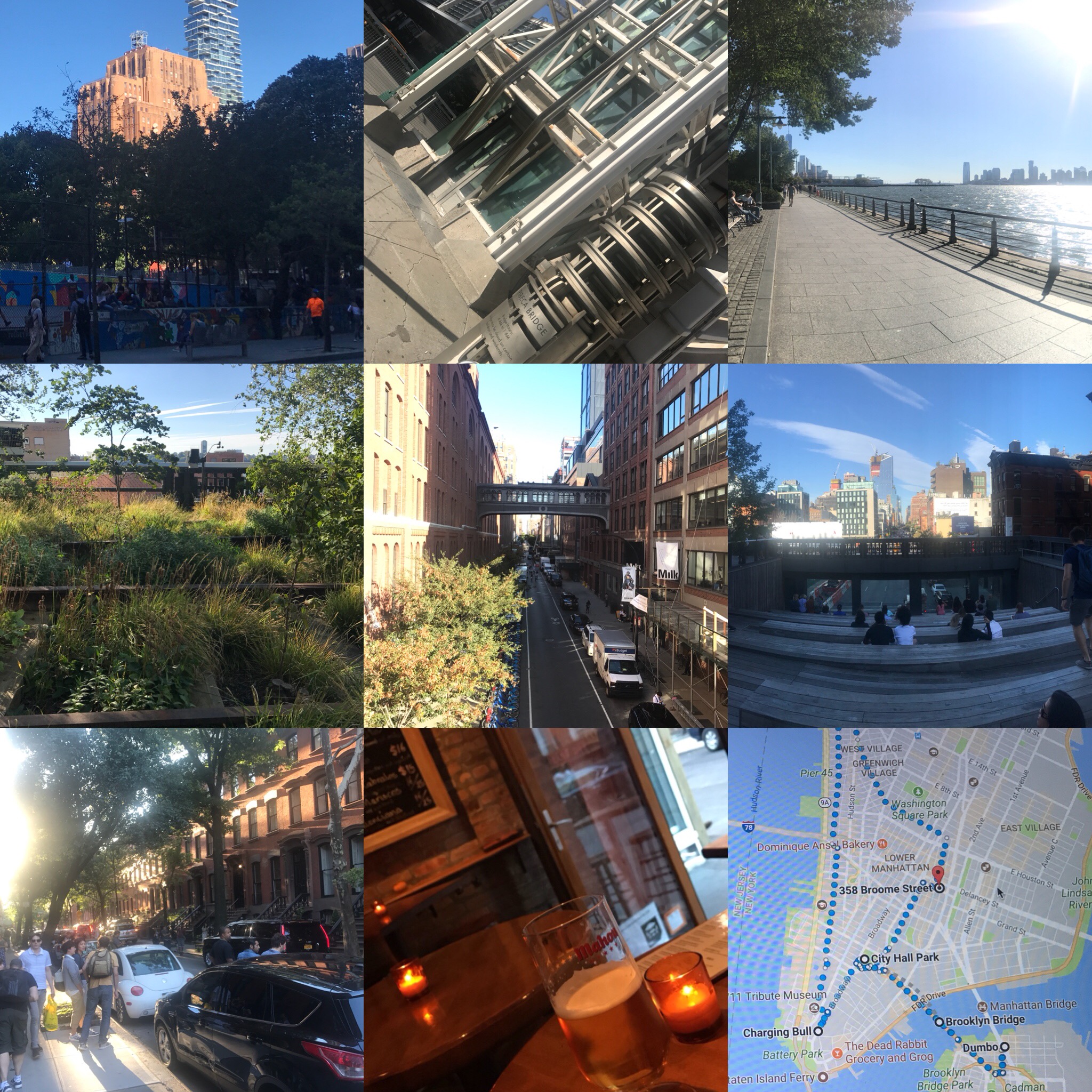 This term that I anointed myself while walking alongside the Hudson River, is due to the fact that this trip is at least the third where I have gone somewhere with good intentions for my camera, either to try and arrange a photoshoot with a local model or perhaps get some artsy street photography out and about. But once again, I didn’t follow through with my plan. Why? Because when I have a limited amount of time somewhere I like to take in as much of the culture as possible. I prefer traveling light, put in my earphones and push start on a playlist that I can mostly ignore but which provides my body with a pulse to keep me going; meanwhile I am constantly capturing moments with my iPhone camera. And I know that if I take my DSLR with a couple of lenses I will revert to becoming absorbed by the art as opposed to living the experiences.

I’ve come to use the phrase ‘Walking City’ after living in the UAE for so long: Dubai has a fantastic, ever-growing Metro system but the infrastructure and climate means you inevitably drive from district to district. Whilst it’s good when travelling to learn local transport systems (Singapore being the best I have experienced so far) I love great ‘Walking Cities.’ There’s nothing better than pounding the streets to discover somewhere on foot - Beirut is one example, Manhattan is another.

So what else would I have liked to do with my one day, or what would I recommend if you were not in NYC on a holiday? I wish I'd had time to spend at MOMA or at least just one of the many small galleries. Had I been staying in Midtown I would have taken a run or walk around central park; my friend also insisted I visit a small neighborhood Deli for a sandwich or bagel. And, whether you are a fan or not, go and see the Knicks, Nets or even the Red Storm at St. John's University (unfortunately basketball season hadn't quite started.) It’s a straightforward game to watch and the rousing atmosphere at the 'Basketball Mecca,' Madison Square Garden, or even Barclays Center in Brooklyn is unforgettable. Alternatively go and see some live music or standup comedy – the city is home to so much talent and you never know who will walk in to the club to perform and trial some new material.

But apart from this, just explore, experience and create memories.